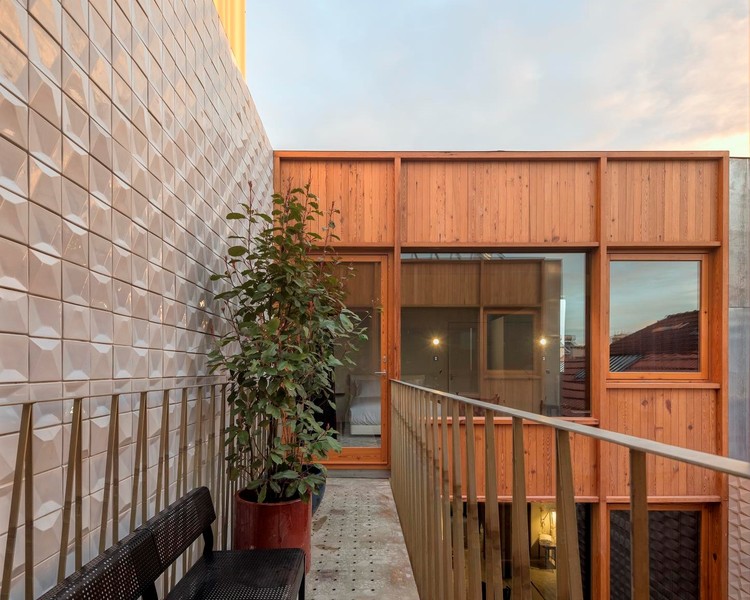 Text description provided by the architects. The project of the Hotel Tipografia do Conto, recently nominated for the EU Mies Award 2022, is a multifunctional space that links residential tourism and cultural events. It comprises ten rooms and a wide ground floor with multipurpose areas. Its architecture incorporates several memoirs of a pre-existing building and avoids the generic tourist offer which has been gentrifying many European cities (like Porto). This former Typographic Workshop was transformed into a domestic-scale structure in order to include the new Hotel rooms. The project refuses any kind of architectural pastiche; instead, it recovers remnants of elements of that earlier condition integrating them into a contemporary design.

The project departs from an existing compound erected in 1916 to house small industrial activities (a Typography and a Graphic Workshop), which has since closed down. Over the last few years, the structure of the building has deteriorated, making it impossible to fully reuse it for the envisaged new functions. From this previous Workshop occupation, some memories remain at the new Hotel design: the main stone façade (in Deco style), the reuse of the central patio for lighting and ventilation, and its internal spatial flexibility, especially at the ground level.

This evocation is extended to the design of the new façades around the patio – a typographic composition in a Riga wooden structure (reusing the beams of the former Workshop) –; but also, to the decorative elements on the ceilings, formed by bas-relief texts which allude to the idea of printing and typographic publishing.

The Hotel rooms recall the old Workshop ambiances: in the proportions of the ceilings; in the way the glassed toilets’ cabinets are placed in the space; in the echoes of the elegant wood surfaces. All rooms are covered by specific scripts, written by ten selected authors, from writers to designers or architects. The scripts are converted into typographic text(ures) and inserted on the surface of the concrete ceilings. Punctual golden metal shears stand out from the ceiling backdrops, enriching the reading of those scripts. The ground floor, which includes a wide Cultural Café, remains a long and flexible space, giving access to the central patio and backyard. It is used as a “stage” for different cultural events intermediating between outdoor and indoor.